During an online panel held at the Brasil Investment Forum (BIF) 2021, speakers pointed out challenges and perspectives for a post-pandemic economy

A new global economy is underway and with growth prospects for the post-pandemic period. It is characterized by new labor relations and an even more attentive look at the planet’s sustainability. The new scenarios and the opportunities and expectations for the future were discussed by representatives from the Brazilian government, international institutions, and civil society, on Monday (May 31), in a panel during the fourth edition of the Brasil Investment Forum.

In the panel “The Post-Pandemic World: Systemic Risks, Governance Challenges, and the New Normal”, mediated by the Secretary of Foreign Trade and Economic Affairs of the Ministry of Foreign Affairs (MRE), Ambassador Sarquis José Buainain Sarquis, governance challenges and systemic risks that involve this new global economy were pointed out. “It is a panel that deals with the global economy, the economic recovery, and the responses of different countries in the face of the crisis we are still experiencing,” pointed out Sarquis. The ambassador recalled, throughout the panel, that “on the path of reforms we have chosen, Brazil has managed to remain among the countries that attract the most foreign investments”.

The President of the Central Bank of Brazil, Roberto Campos Neto, recalled that one of the consequences of the crisis caused by the Covid-19 pandemic has been to question the way global value chains operate. “Global value chains have been responsible for taking hundreds of millions of people out of poverty line in emerging countries. It is an important issue, and it is what society has demanded – that this recovery be inclusive and sustainable,” he assured.

Campos Neto also talked about credit growth in 2020, when Brazil grew 16% – according to him, the highest growth in the emerging market. “In terms of liquidity, the Central Bank of Brazil released 15% of GDP. In terms of capital for the banking system, 20% of GDP. It was the biggest release in the whole emerging world as well. And we look at the month of April and see that credit continues to grow. And, most important, the default rate, which everybody expected to be quite high, has come in relatively low so far, very close to the minimums,” explained the president of the Central Bank.

The data highlighted by Campos point to a positive balance for Brazilian development which, according to the President of the Brazilian Development Bank (BNDES), Gustavo Montezano, must be sustainable. “The function of a development bank is to make sustainable development, socially, environmentally and economically. The crisis has shown that there is not one of them without the others. When we talk about development, it goes through this balance. There is no investment today that is not socially and environmentally appropriate”.

Sustainability was also an issue addressed by the President of the Central Bank of Brazil, in line with technological innovation, both considered the bases for the growth of the economy. “A whole part of technology comes together with our agenda, which is basically related to the theme we mentioned: inclusion and sustainability. There is nothing more inclusive than technology and digitalization. So you have a strong agenda in that sense, with opening markets through technology. We had launches like the PIX system, we have projects for currency regulation. In general, we are optimistic with the growth, with the way the economy is reacting and with the possibility of a stronger reopening in the second semester”, highlighted Roberto Campos Neto.

The Brazilian results and efforts pointed out during the panel show the relevance of Brazil in the international market. According to the Vice President of Countries of the Inter-American Development Bank (IDB), Richard Martínez, “Brazil has a lot of potential to develop in the foreign market. We see it as a country with great potential for productivity. Brazilians are visibly engaged”.

The economic recovery is going through a vigorous process. This is what the Director of Macroeconomics at Santander Brasil, Ana Paula Vescovi, points out. “A year ago, we discussed how to sustain active companies to get through this period. Today, we are talking about a very fast recovery. It is important to understand what it derives from: to place monetary incentives and stimuli so that both companies and families can make this transition,” said Vescovi, also recalling that “there is a need to move forward with reforms and stabilize the Brazilian macroeconomy. And she added: “Brazil has already taken advantage of the time for reforms and approved important improvements in the regulatory frameworks”.

Brazilian economic growth has a strong drive in agribusiness, a theme discussed during the panel by BRF’s Global CEO, Lorival Luz, who emphasized: ” In Brazil, at no time has agribusiness stopped producing, supplying food, not only for the Brazilian population, but it has continued exporting and serving the foreign market. This is fundamental to sustain the Brazilian trade balance”.

The Brasil Investment Forum (BIF) 2021 offered three more panels on its first day: on industry, energy, and Foreign Direct Investment (FDI). The presentations were made by qualified speakers, who shared their knowledge and helped identify opportunities for the country. If you would like to follow the publications related to the other debates at BIF, Brazil’s largest investment event, please visit  the website www.brasilinvestmentforum.com.

The Brasil Investment Forum (BIF) – organized by Apex-Brasil, the Inter-American Development Bank (IDB) and the Brazilian Government – is the largest event for investment attraction in Latin America. The 2021 edition, which was held online, brings together Brazilian authorities and executives from major companies to discuss opportunities in the sectors of infrastructure, energy, agribusiness, technology and innovation. 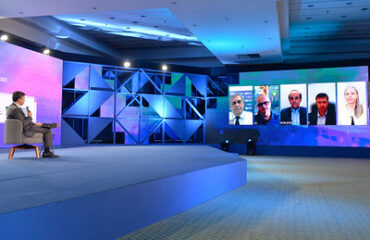 Panel 6 – MCTI and entrepreneurs discussed investments for startups and unicorns