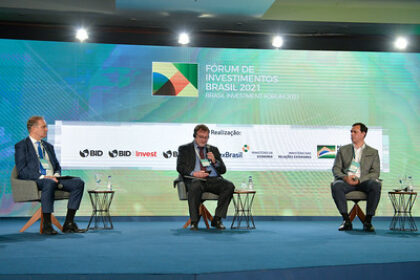 On Monday (31), The Brasil Investment Forum (BIF) opened room for an in-depth discussion with high-level participants, on the importance of Foreign Direct Investment (FDI) for Brazil’s post-pandemic growth.

The setting for the forum could not be more appropriate: BIF is considered the largest event for foreign investment attraction in Latin America. The whole program of the event was based around qualified discussions on the opportunities found in Brazil and its repositioning as a key player in global economy.

During the panel “FDI: Growth in Brazil Post-Pandemic: the role of Foreign Direct Investment and the reform agenda” representatives from the Brazilian government, international institutions and civil society discussed the role of investments for the country’s sustainable and balanced growth.

The approval of the Social Security reform and the government’s efforts to accelerate the tax reform and privatizations are positive aspects to further attract FDI.
And Brazil’s track record reflects its ability to attract interest abroad: according to the United Nations Conference on Trade and Development (UNCTAD), the country received US$ 75 billion in foreign investments in 2019, up from US$ 60 billion in 2018. With the increase, Brazil now ranks fourth among the top FDI destinations in the world.

The Director of Corporate Management at Apex-Brasil, Roberto Escoto, moderated the panel and took the opportunity to list the country’s potential and measures related to investment attraction. “One of the reasons why investors seek Brazil is the size of our domestic market – 210 million people. But not only that. Brazil serves as an export platform for other countries, especially in Latin America. So, there is no doubt that the country is important for attracting investments for the entire region”, he emphasized.

Escoto highlighted the sanitation legal framework as an “example of initiatives that are being taken to make investment more inclusive and more sustainable”. For him, “Brazil can absorb billions of dollars in sanitation investments, and this certainly will improve the living conditions of millions of Brazilians who still do not have access to drinking water and sewage”.

For his part, the Special Secretary for Foreign Trade and International Affairs of the Ministry of Economy, Roberto Fendt, recalled tools already adopted by the government that are capable of improving the business environment and, consequently, the formal labor scenario, social inclusion and adherence to environmental standards.
“The guidelines offer principles and standards that seek to improve standards, covering a large number of areas, such as labor relations, human rights, combating corruption, environment, taxation, and competition,” explained Fendt. The secretary also mentioned that the Brazilian government has participated, since 1977, in the Investment Committee that works within the Organization for Economic Cooperation and Development (OECD).

Also present at the panel, the head of the OECD’s Investment Division, Ana Novik, affirmed that “Brazil has the profile to become a member of the OECD”, since it is “firmly engaged in activities that are prerequisites for this, and is on the right path”. Novik reminded that economic relations must bring social benefits. And this concern relates to FDI in a positive way. “We have to look at foreign investments and the growth potential of the country. It is very important to increase FDI because if you don’t have direct investment, there will be no sustainable investment,” he concluded.

The Vice President for Sectors and Knowledge of the Inter-American Development Bank (IDB), Benigno López, reinforced that Brazil can become a leader in this agenda and will take a step forward by making important reforms. And, confidently, he predicted that “the investments will start flowing, since Brazil has everything necessary. These are opportunities that happen once in a lifetime and this is the moment”.

With a long history of investments in Brazil, the general manager of Siemens Energy Brazil, Andre Clark, defended Brazil as a “global destination competitor for investments in innovation”. For him, “the FDI concept has changed, countries compete for pension funds as well as for companies. No longer for the domestic market, but for their projection as an export platform for technology, products, and services to the planet. We no longer think of direct investment exclusively for local markets”.

In the investor’s view, “innovation occurs in a network, within an ecosystem, generally global, and increasingly closer to where the problem is located”. According to Clark, “Brazil has enough scale and size to reach the whole planet”.

Bravo Motors CEO Eduardo Muñoz reported that he found a positive environment in the country. “We found a very favorable ecosystem in Brazil, with a very large market, and an almost fundamental strategic geopolitical positioning for our arrival. This made it so that we are here today, not only with the support from the Federal Government and
Apex-Brasil, but also from the state and the municipality. We are very happy to be here”, he celebrated.

Muñoz thanked the invitation to participate in BIF and reaffirmed the right choice of Bravo Motors to install in Brazil. “The country is having a very important economic opening and reducing inefficiencies in the economy. We work hand in hand with
Apex-Brasil”, he affirmed. He also pointed that the moment is unprecedented in terms of productivity and a new industry, called “Industry 4.0”, characterized by changes in the energy matrix, in the mobility system, and in communications, among others.  “The great challenge we have today is precisely how we take advantage of all this value and productivity that will generate trillions in new economic resources, in the transformation of the old economy into the new, and of old jobs into new ones. That is where the challenges lie. Without a doubt, it is an exciting time in the world. We are going to experience a very different world. I just hope we make the right decisions to make it much better,” concluded the CEO.

BIF is organized by the Brazilian Trade and Investment Promotion Agency (Apex-Brasil), the Inter-American Development Bank (IDB) and the Federal Government. This fourth edition of the investment forum takes place for the first time fully online. The event provides a platform where participants from all over the world can access its content, in different languages.

On the first day of the Brazil Investment Forum (BIF), qualified speakers shared their knowledge and helped identify challenges and opportunities for the country. Three other panels were held throughout the day, adding discussions about the global economy, industry, and energy. To follow the publications related to BIF, the largest investment event in Brazil, visit www.brasilinvestmentforum.com. 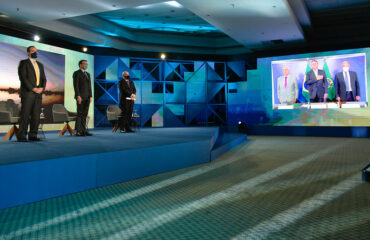